Posted at 15:59h in Kingfish by nolamedia
0 Likes 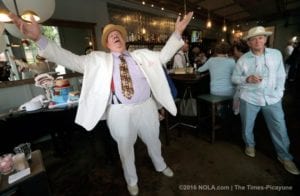 Brett Duke, Nola.com | The Times-Picayune The Kingfish restaurant commemorated its namesake’s birthday Friday (Aug. 26) with a Huey P. Long look-alike contest and second-line in the French Quarter. Long, who was dubbed the “Kingfish” by his followers, was born Aug. 30, 1893. He served one term as Louisiana governor and was halfway through his first term as a U.S. senator when he was assassinated Sept. 10, 1935. The second-line led by the Uptown Strutters began and ended at the restaurant where guest enjoyed Ramos Gin Fizz drinks. Long was known for his love of the Ramos Gin Fizz. The winner of the Huey P. Long look-alike contest, Kenneth Bickford, received a monthly complimentary […]